Aishwarya Rai Bachchan penned a heartfelt note remembering her ‘Jazbaa’ co-star Irrfan Khan. The actor had been battling cancer since 2018 and was admitted to the hospital on Tuesday for colon infection. “Heartbreaking news… so saddened to hear about the demise of my dear friend Irrfan… the brightest, most genuine, humble, kind and eventually bravest soul… May he Rest in Peace. God Bless Much love and strength to Sutapa, Babil, Ayan and his loved ones at this very difficult time,” wrote Aishwarya. 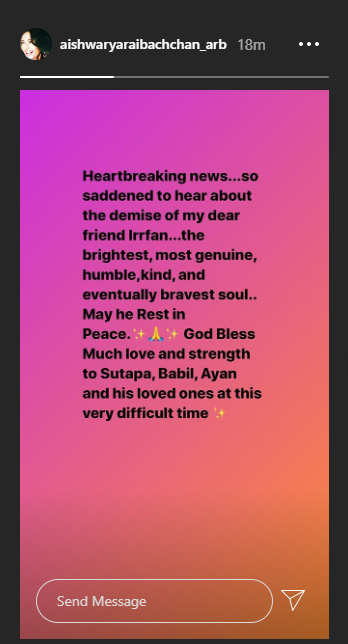 Irrfan Khan was buried at Versova kabrastan, his family had said in an official statement, “Irrfan was buried at the Versova kabrastan in Mumbai at 3pm this afternoon soon after the news of his passing away was announced. In presence were his family, close relatives and friends. Everyone paid their final respects and mourned the loss of his passing away. We pray for his peace and we hope he’s in a better place today. He was strong in his fight, and we all have to be strong too in this loss.”

Vishal Bharadwaj, Kapil Sharma and Mika Singh had arrived to pay their last respects to the acting stalwart. Irrfan Khan is survived by his wife Sutapa and sons Babil and Ayan.