Alia Bhatt might be busy shooting for her upcoming projects but hey, a little social media activity never hurt anyone. The actress took to Insta to play a round of ‘What should I post a photo of’ game and the series of pics that followed offered an insight into the actress’s world.

From revealing her favourite book to the most helpful person in her life, Alia has been treating fans to unseen gems from her phone’s photo gallery. When asked her to share the ’22nd pic in her camera roll’, the actress posted a cute selfie. While it is difficult to take eyes off her, the background with a ‘No 8’ jersey framed on the wall, is equally compelling. 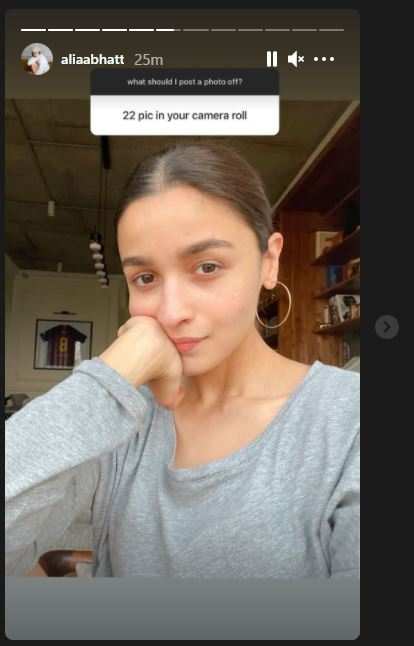 Alia’s beau Ranbir Kapoor is a huge fan of football and is often spotted sweating it out on the field. He considers ‘8’ to be his lucky number and wears it on his jersey too. In the past, the actress, too, had sported a ‘No 8’ jersey, writing, “To infinity and beyond”. Guess, jersey no 8 is her of professing her love for RK, hence the place of honour.

Meanwhile, on the professional front, Alia will be seen alongside Ranbir in Ayan Mukerji’s ‘Brahmastra’. She also has ‘Gangubai Kathiawadi’, ‘RRR’ and ‘Takht’ in her kitty.