One year ago OTT made its presence felt in our living rooms and mobile phones, promising a plethora of content and a boom of entertainment. With quick subscription options, movies played at our fingertips, keeping everyone engaged at a time when the world was battling a pandemic. In this week’s #BigStory, let’s take stock of how the digital medium has changed the hero, negated star power, created unexpected success stories and yet, scared a few producers.

MEET THE GAMECHANGERS
Bobby Deol got a second lease of life with his super successful show ‘Ashram’ which is in for a third season now! Sushmita Sen, who has been away from the camera for a long time, wrote an engaging success story with ‘Aarya’. Making it big from regional cinema, Pratik Gandhi changed the face of a hero while Abhishek Bannerjee became a hot favourite with his characters. They are the game-changers who are here to stay!

Pratik Gandhi (Actor): Skin colour and body type for a hero has changed
Pratik Gandhi is the biggest success story of OTT platforms. With his guy-next-door look and Gujarati charm, the actor floored the audience as Harshad Mehta in ‘Scam 1992’. Did you know Pratik Gandhi had been on the acting scene for over a decade but became a household name only thanks to the digital medium? “After ‘Scam’, I am being offered a lot of big production films and web series in Hindi. OTT has changed the ‘so-called’ definition of a hero. That look, feel, skin colour, and body type, which people consider a hero should have, has been completely changed. This shift has been interesting for an actor like me,” shares Pratik Gandhi. 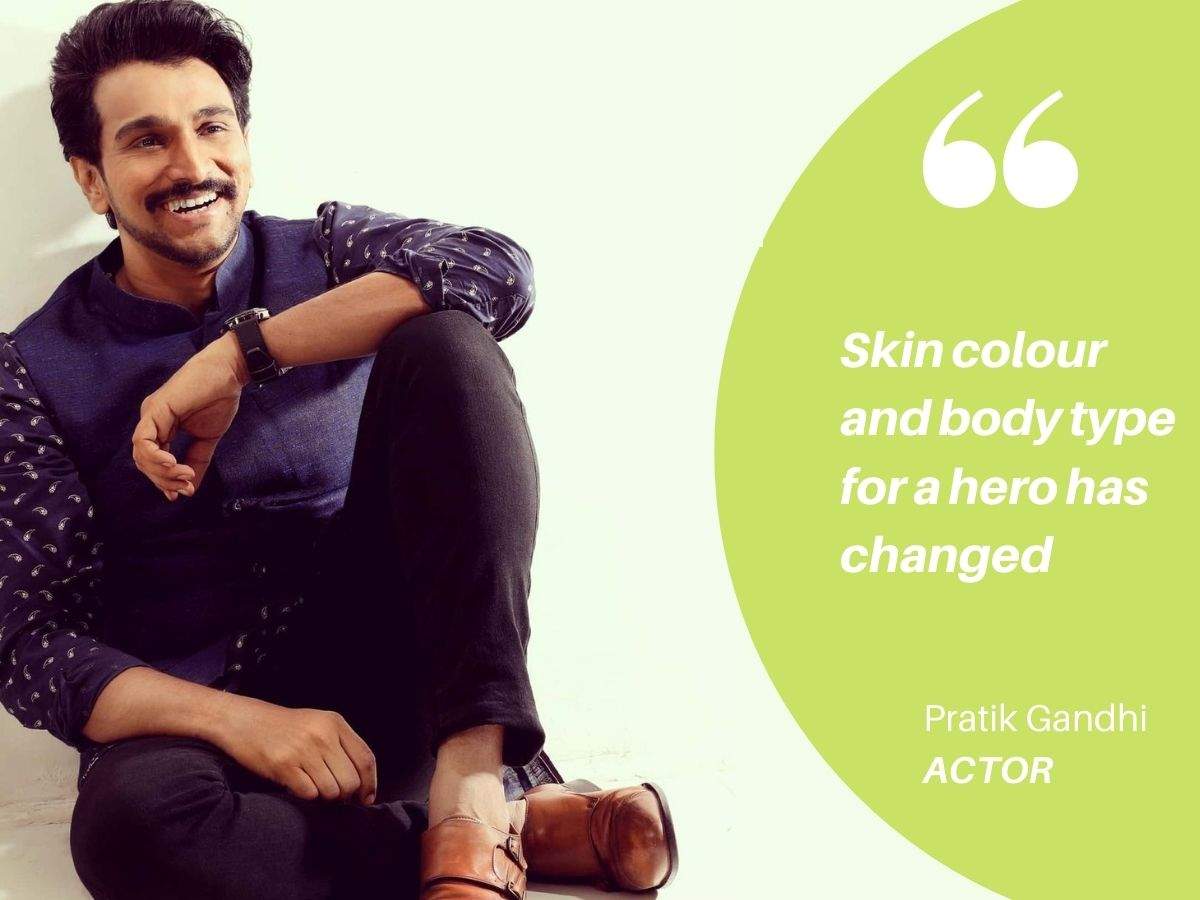 Manoj Bajpayee (Actor): It is better to have as many platforms
On the other hand, Manoj Bajpayee is refusing to slow down! The established actor has championed streaming platforms with his presence in hits like ‘The Family Man’ web series and OTT movie ‘Silence… Can You Hear It?’. The actor made a swift transition from the big screen to people’s mobiles and achieved success with everything he touched! Encouraging the OTT boom, Manoj Bajpayee opines, “I don’t think any OTT actor should fear theatre or vice-versa. The more avenues there are, the more opportunities will be created, so it is better to have as many platforms for each and every one of us. It is good for every creative person who is part of the industry.” 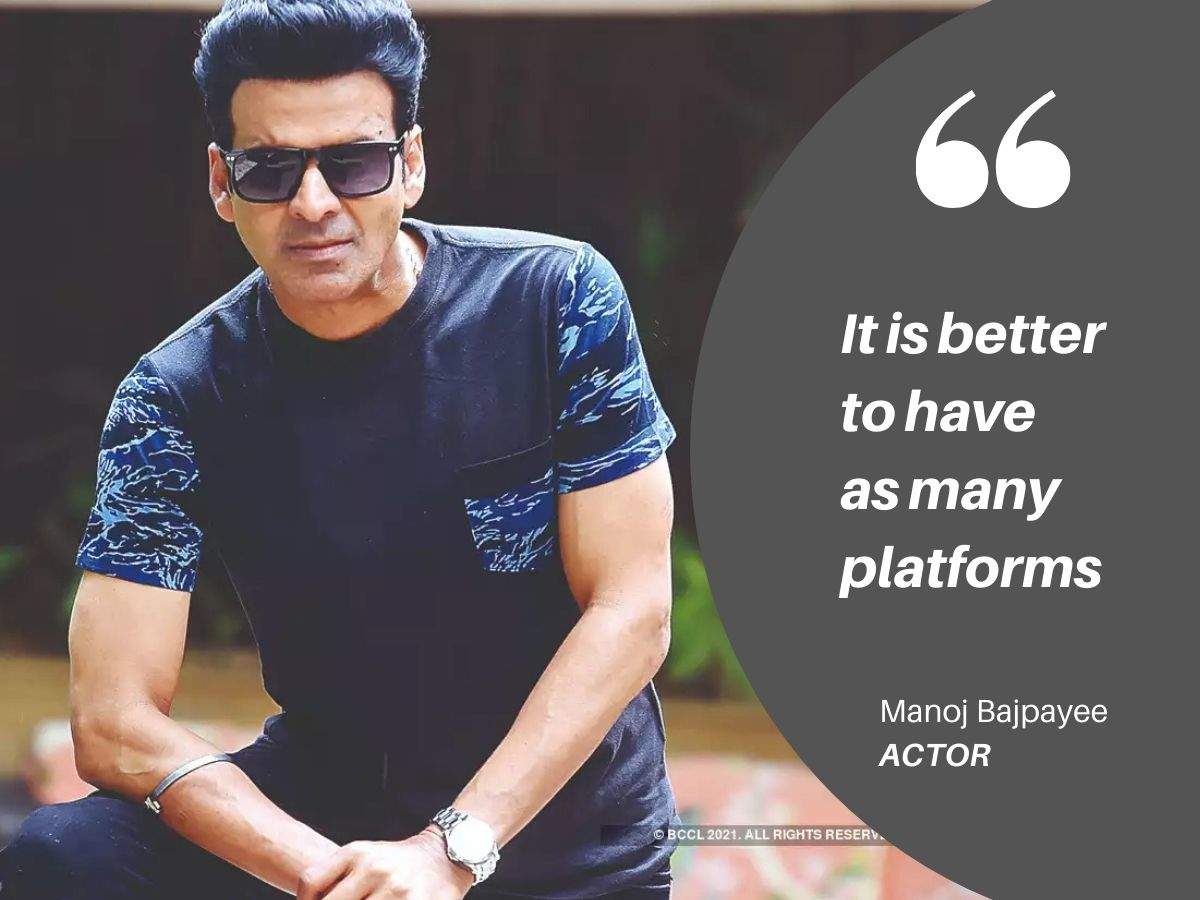 HAVE DIGITAL PLATFORMS NEGATED STAR POWER?
Jumping on the bandwagon, actors like Saif Ali Khan, Abhishek Bachchan, Kajol, and Shahid Kapoor are making inroads into different digital mediums. While star power drives audiences to the theatres, the big names are not necessarily bringing in the eyeballs for streaming platforms.

Nawazuddin Siddiqui (Actor): OTT has no monopoly, giving an equal opportunity to a lot of actors
Ask Pratik Gandhi, if star power has to be shed for OTT, and the actor replies, “Yes, definitely! Purely on the basis of the name, people are not ready to watch anything! Only those who can add value to a story by creating an authentic character is required than anything else.” While Manoj Bajpayee, who has seen it all, opines, “I don’t think anyone is primarily thinking that OTT will be successful. Everyone is just making content, hoping that it will be liked by everyone. It is a success of the platform and not just the stars. Also, we should not fear any new platform, talent, or experimentation. Eventually, as the saying goes: ‘If you are fearless, luck will favour you’. So, I am happy that more and more people are getting into it. OTT has become a fantastic and buzzing avenue for each creative person and my best wishes to each person who is doing a great job.” 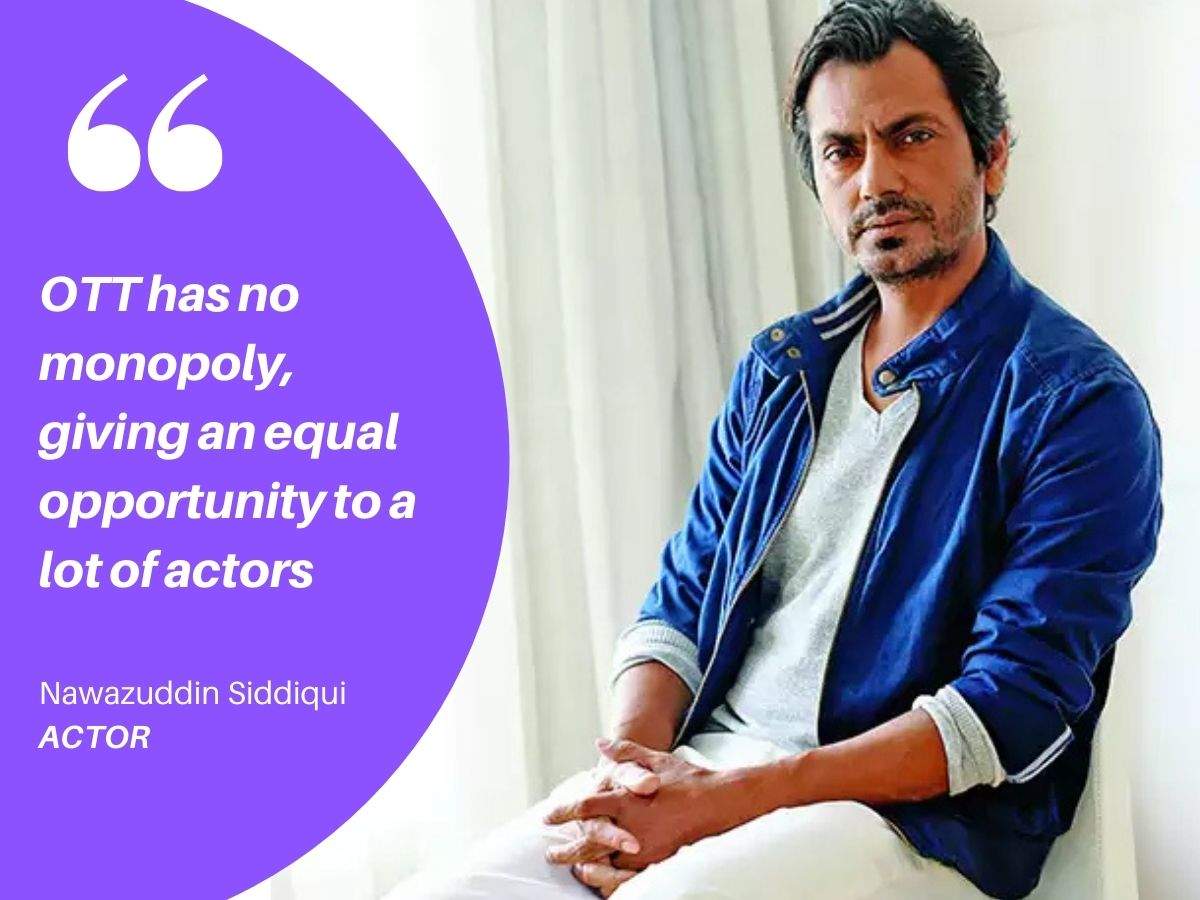 Calling it a level playing field, Nawazuddin Siddiqui asserts, “OTT has no monopoly, giving an equal opportunity to a lot of actors. In fact, such a democratic environment should be adopted in theatres too because our country has a lot of talent, be it in terms of directors or actors. OTT has proved that there are many talented actors who were lost because of the theatres”.

ARE PRODUCERS STILL SCEPTICAL ABOUT OTT?
Despite OTT being termed as a success story, Bollywood doesn’t seem entirely convinced. The makers of ‘Chehre’ pulled the plug on their film’s release last-minute as theatres started shutting down while the makers of ‘83 and ‘Sooryavanshi’ are still holding onto their dear movies for a grand theatrical experience. Kangana Ranaut-starrer, multilingual ‘Thalaivi’ has also decided to skip OTT and wait for the day when cinemas will open their doors. And everyone has their own reasons to expertly avoid the digital rush. 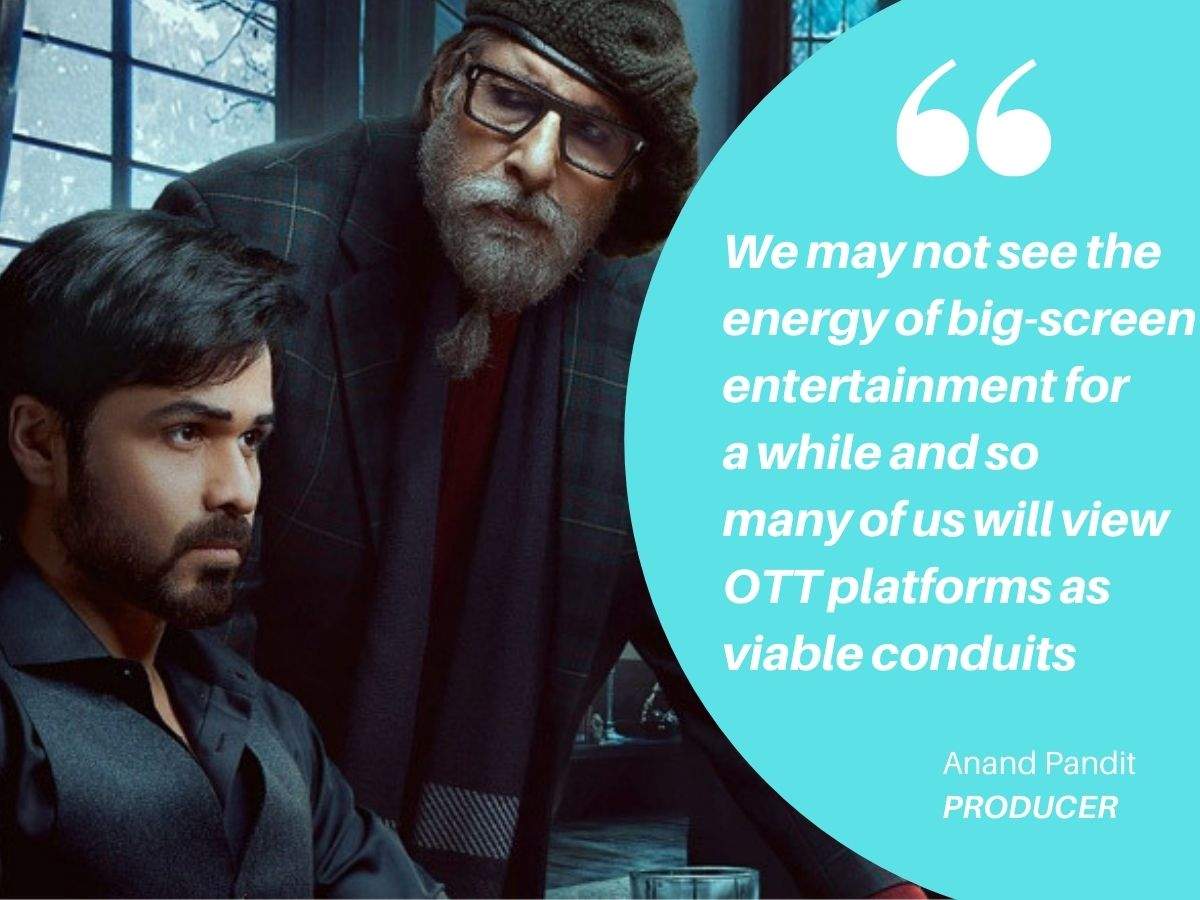 Vinod Bhanushali (Producer): We believe in the power of cinemas in favourable times
Co-producer of films like ‘Ludo’, ‘Chhalaang’, ‘Durgamati’, Vinod Bhanushali feels that not all movies are meant for digital platforms. “In the times we are in, OTT is our only option to get profits out of the investment module. I strongly believe that certain films can work wonders when released in the theatres such as ‘Kabir Singh’ and ‘Tanhaji: The Unsung Warrior’, both of which were made by debutant directors, released in the cinemas, and turned out to be the biggest blockbusters for Shahid Kapoor and Ajay Devgn. This was only possible because of the power of the theatres. We believe in the power of cinema in favourable times, but as of now, we have to wait due to the situation at hand. Having said that, OTT is an additional revenue stream for producers to make films.” IS OTT BRINGING IN THE MONEY?
Films are releasing back-to-back on digital platforms, and streaming giants are on a spree to acquire rights to various movies. But is this bringing in the moolah for the parties involved?

Komal Nahta (Trade analyst): The losses for films releasing on OTT are more
Trade Analyst Komal Nahta gives a low down on how the losses continue to mount for filmmakers with OTT adding onto it. He explains, “OTT is coming to the rescue of producers because now these platforms are giving increased prices for premier releases. It is a big relief to the producers otherwise the investment would be locked till cinemas reopened. However, the losses involved for any film that has been released on OTT are far more than those which have been released in theatres. This is because one big chunk of revenue, which is the cinema platform, is gone. So to expect, that the target amount, which they would have earned from the cinemas, that will come in from the OTT platform, is not possible.”

Citing a recent example about ‘Radhe: Your Most Wanted Bhai’, he adds, “It was the misfortune of Zee that the day they released ‘Radhe’, all the theatres in the country were shut. Otherwise, they would be making far more money than they are now. Salman is the biggest opening star and that was lost.” 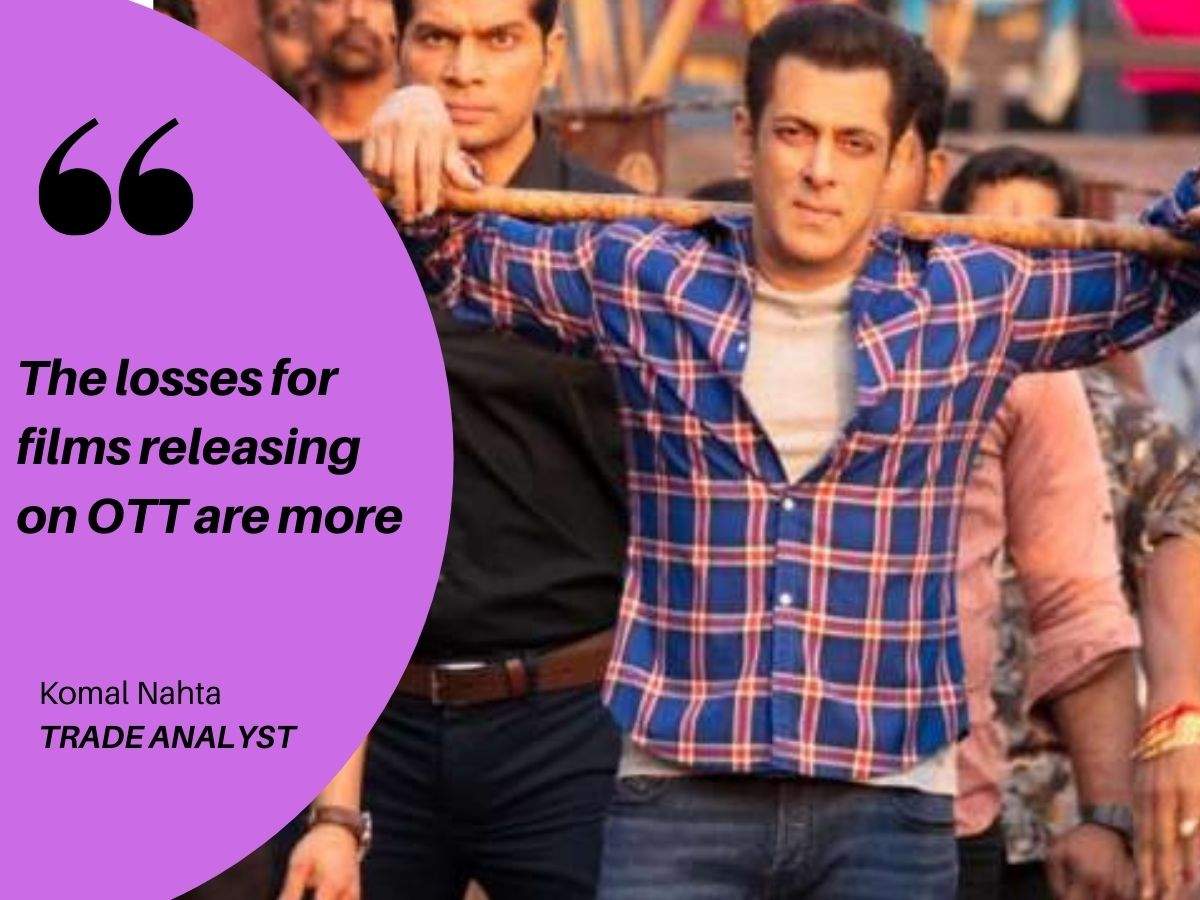 IS THE CHANGE HERE TO STAY?


Netflix has announced an ambitious slate for this year with biggies like Kartik Aaryan’s ‘Dhamaka’ and Madhuri Dixit-starrer ‘Finding Anamika’ scheduled for a release. On the other hand, Amazon Prime has picked up Farhan Akhtar-starrer sports drama ‘Toofaan’ and Vidya Balan’s ‘Sherni’. While they are investing in some interesting movies, what are the returns?

Komal Nahta (Trade analyst): It is not just profitability per film but overall also OTT platforms want a space where the subscribers’ base increase, which is a permanent asset


“OTT platforms are also facing losses because somewhere even they know that they are paying more than what they can recover but that is because they want to build a library and eventually build a subscriber base in India and Asia. So it is not just profitability per film but overall also they want a space where their subscribers’ base increases, which is a permanent asset,” shares trade analyst Komal Nahta.

OTT seems like a stop-gap arrangement till the time these unprecedented times are over and theatres return to their glory. Those with deep pockets, who can hold onto their movies for a bit longer, are keeping the hope alive. Till then, entertainment is at your disposal on different digital avenues!