From Alia making waves with her RRR first look on her birthday to Gauahar Khan stirring up a storm for flouting COVID-19 norms, Amitabh Bachchan getting ready for operation once again and more, here’s everything that has been making headlines today. We bring out the latest segment of BollyBuzz- the usual mix of news and gossip. 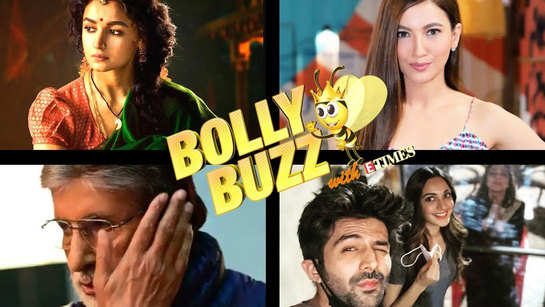 Alia Bhatt is celebrating her birthday today and she got the celebrations off to a glitzy start with Karan Johar throwing her a star-studded bash. Celebs including Deepika Padukone to Arjun Kapoor and Malaika Arora, Ayan Mukerji, Shakun Batra, Aditya Roy Kapoor and many others were seen arriving at the party. However, it was Ranbir Kapoor who was missing in action as he is currently in quarantine. Meanwhile, the birthday girl dropped her first look as Sita from the SS Rajamouli’s next big venture ‘RRR’ and it went viral!

The long-awaited Akshay Kumar and Katrina Kaif starrer ‘Sooryavanshi’ will be released on April 30 as Akshay was happy to confirm the same when he dropped an official post announcing the same. Joining him in spreading the hype and excitement were Ranveer Singh and Ajay Devgn who also shared the action-packed clip.

Today actress Gauahar Khan, was booked by the BMC for flouting covid norms. Reportedly, the actress was going out for a film shoot despite testing positive for the novel Coronavirus. DCP Chaitanya S exclusively told ETimes, “Gauahar has been booked for violation of COVID rules. She had tested positive for coronavirus and was supposed to stay home and quarantine but instead went for a film shoot.” As per reports, a BMC official had visited her home for the same inquiry but did not find her there, prompting them to raise the alarm.

On the other hand, Tabu who has resumed shooting for, ‘Bhool Bhulaiyaa 2’ seemed perfectly safe and comfortable in her Z++Bio-Bubble as she waited on the sets. Putting safety before selfies, the actress refused to budge from her safety bubble while posing with her co-stars Kartik Aaryan and Kiara Advani.

In another health update, Amitabh Bachchan revealed that his second eye surgery was successful and that he is currently “recovering well”. Earlier this month, the Megastar opened up about his first eye surgery and shared with fans that the recovery is “slow and difficult.” Taking to Twitter late Sunday night, Bachchan thanked his doctor and called the surgeries a “life changing experience.”