From Sana Khan opening up about her marriage to Neha Kakkar announcing her pregnancy to Dhanush going Hollywood to the NCB probing Karan Johar’s 2019 party video, here are all the important headlines of the day by ETimes. We bring you our latest segment BollyBuzz which goes beyond the usual mix of news and gossip. 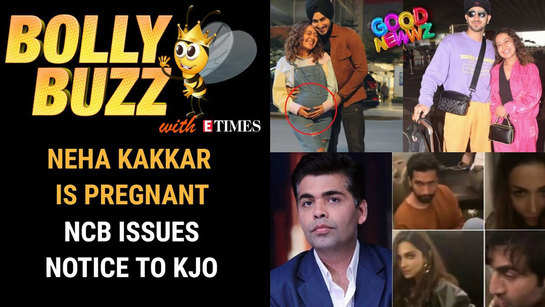 It seems like singer Neha Kakkar is pregnant with her first child. The singer’s big announcement came in the form of an adorable social media post where she was seen posing with hubby Rohanpreet as he cradled her growing baby bump. Soon after this, congratulatory messages poured in on social media, with friends and fans wishing her the best on this journey to motherhood.

Meanwhile, former actress Sana Khan got candid about married life and tying the knot with the man of her dreams. “Getting married to Anas wasn’t an overnight decision. I prayed for years for a man like him in my life. What I liked best about him is that he is shareef and unn mein haya hai,” Sana exclusively told ETimes. While talking about going the family way, she admitted, “My husband wants me to take time, but I definitely want to become a mother soon.”

Today marked the golden jubilee of the release of Rishi Kapoor’s film ‘Mera Naam Joker. To this, Neetu Kapoor took to her Instagram to remember her late husband in a post that read, “Mera Naam Joker released on 18th Dec. 1970 .. today would have been his 50 years in the Indian film industry #rishikapoor.” Daughter Ridhima Kapoor along with several celebrity friends, including filmmaker Karan Johar showered their love and paid tribute to the late star with touching comments to the post.

Meanwhile, it seems that the NCB has taken cognisance of his widely circulated video of Karan Johar’s infamous 2019 party where allegedly stars were seen in a ‘drugged’ state. Reportedly, NCB requisitioned Karan Johar for the original source of the video in order to ensure its authenticity. Based on the information gathered and its genuineness, the subsequent action will be decided. While KJo has now submitted his reply and the document to the central agency, who will now begin their examination of the clip, an official went on record to say, “We have NOT asked him to appear before us.”

On the other hand, Dhanush is all set to head back to Hollywood for a film by Avengers Endgame director-duo – the Russo Brothers. The south superstar will join forces with Captain America star Chris Evans and La La Land hunk Ryan Gosling for the big-budget spy thriller.