Celina Jaitly opens up on her twin pregnancies: The babies pressed on my heart so breathing was difficult | Hindi Movie News

Celina Jaitly has had two twin pregnancies, which is as rare as one in 7,000,00! On the occasion of Mother’s Day, the actress opened up about the difficulties she faced during her first pregnancy and her second pregnant as a mother of twins was equally tough. Sharing pictures from her twin pregnancies the actress wrote, “I was diagnosed with gestational diabetes in both my pregnancies due to twin baby hormones, I had to really watch what I ate and went through a extremely strict restrictions throughout both pregnancies.” 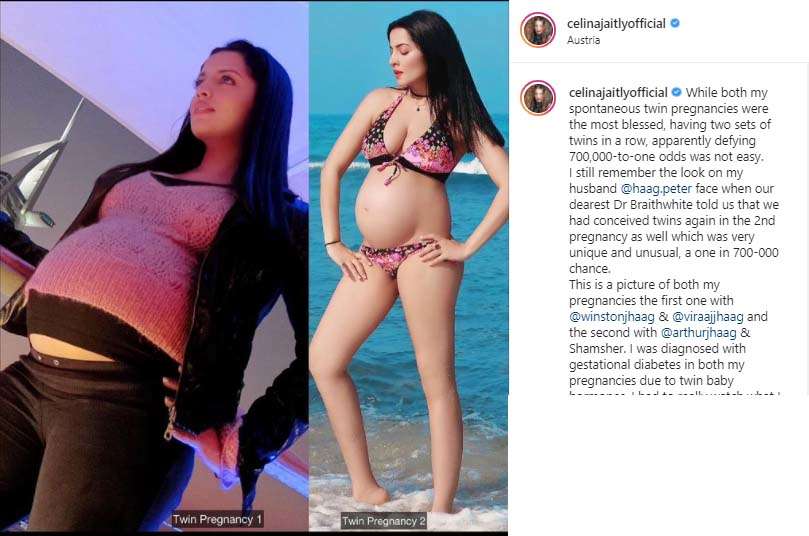 She went on to reveal that losing her father while she was expecting her second twins affected her deeply. “Due to my father’s loss in my second twin pregnancy I literally lost the ability to walk due to the shock and had to be pushed on a wheelchair by my husband Peter. Being tiny my bones were affected and the babies pressed on my heart, so breathing was great difficulty,” wrote Celina.

With her second pregnancy, the actress lost one of her twins and her own mother, which taught her a lot of ‘motherhood’. “Facing the loss of baby Shamsher to a hypo plastic heart, to @arthurjhaag ending up in an incubator for 3 months as well as my mother’s sudden passing, following all this lead me to believe that it was “Motherhood” that made me realise the strength I never thought I had or was capable of. Makes me think often of all the sacrifices my own mother ( Dr Meeta Jaitly) did as an infantry officers wife bringing up two kids most of her life by herself, making sure we turned out the way we did. I also believe Motherhood has no gender I truly believe it is how you describe the very powerful strength, resilience and unconditional love that gives a child the courage to grow. I am so grateful I have the opportunity to experience this power, and to have also been on the receiving end of it too in all my formative years. Happy Mother’s Day to all who vow to love, nurture and care,” concluded Celina.