Exclusive Interview!’Mumbai Saga’ director Sanjay Gupta: My films are set in a completely different universe; I want them to have a colour palette and a style of their own | Hindi Movie News

“I am constantly reinventing myself to stay at the top of the game,” says director Sanjay Gupta, as he reflects on the kind of films that he has been making since the ’90s. A sucker for action entertainment, Sanjay has created his own universe of cops and gangsters. His upcoming film ‘Mumbai Saga‘ is all set to hit the big screens tomorrow, on March 19. The trailer lent insight into the film that is set in the ’80s and ’90s and chronicles the events that led Bombay to become Mumbai. It was a time when mills were being replaced by malls and high rises. In an exclusive conversation with ETimes, Sanjay opens up about his take on the action genre, and how the depiction of violence has changed in films since the ’90s. Read on :

Congratulations on ‘Mumbai Saga’! I watched the trailer and loved the old-world charm of Bombay which have managed to capture…

It has always been fun shooting in Mumbai; it feels like a breeze. This was also my fourth consecutive film to be shot in the city after ‘Shootout At Wadala’, ‘Jazbaa’ and ‘Kaabil’. The challenge is to make Bombay look more interesting and dynamic. 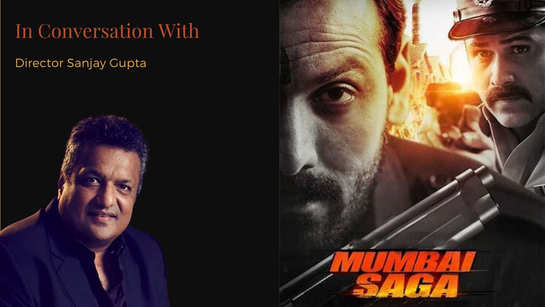 ‘Mumbai Saga’ is going to be one of the biggest theatrical releases after almost a year and can be a marker for other big releases planned. Are you feeling the pressure?

I am not worried about other films, but I am really worried about how ‘Mumbai Saga’ will do in theatres. I don’t really think the fate of other films depends on our film, but a lot of anxiety and uncertainty that other filmmakers and distributors are going through should subside, either for good or worse. The biggest challenge that we are facing today is the increasing number of Covid cases, which are resulting in night lockdowns, which means you lose your 9 pm and 10 pm shows. This is a cause for concern as late-night shows, especially on the weekdays, are the shows people go for. But having said that, we also have an audience who has waited for more than a year to enjoy movies at the theatres and ‘Mumbai Saga’ is a hardcore big-screen experience; it has been written, designed, and edited like that.

Has Quentin Tarantino influenced your filmmaking?

Not at all. People make comparisons just that because ‘Kaante’ was broadly inspired by the concept of ‘Reservoir Dogs’. I haven’t even seen ‘Reservoir Dogs’–I used to get bored of it, whenever I started watching it. But I think the comparisons also stem from the fact that he watched ‘Kaante’ and really loved it; he has been very vocal about it. Although I am a great admirer of Tarantino’s work and I love his movies, that’s about it. I think I am far more inspired by Mani Ratnam and Mukul Anand.

Have Bollywood action movies evolved over the years? Is romance still a necessary element?

Well, romance is not really a necessity. In films like ‘Die Hard’, ‘Terminator’, there’s no romance. In my films, there’s some romance, but I make sure not to make it an integral part. I don’t really see the need for it, the same way I don’t see the need for profanity, obscenity, or vulgarity.

A lot of people have been asking me if OTT platforms have brought about a change in action and crime genres. And ‘Mirzapur’, ‘Paatal Lok’, ‘Sacred Games’ are really great shows, but do you see anything cinematic in them? Would you want to go and watch it on the big screen? They have been designed for you to consume one-on-one on your laptop or on your television. A film is a film, and it’s meant for a complete big-screen experience. The only thing is that with OTT, they have got a license to use sex and violence, but there’s absolutely no need for it.

Action movies have considerably evolved over the years. The way we shoot action today is very different from what we shot back then. We have got support from VFX, technology, and even the cameras that we are using to shoot. When you combine all these elements, the nature of action that you see on screen today differs from what I did back in the ’90s.

I was reminded of ‘Jazbaa’ when watching the trailer of ‘Mumbai Saga’ due to similar colour palettes and style of shots. Is a signature style really necessary for a director?

Of course, a signature style is really necessary for a director. When you watched the trailer of ‘Mumbai Saga’, even without my name being mentioned, you would have known it’s my film. I try to create a new look every time but my films are set in a completely different universe, and I want them to have a colour palette and a style of their own, which is very unlike the real world.

Is there pressure to maintain the style?

No, there’s no pressure to maintain that. Your cinematic style is like your handwriting–a lot of people have great handwriting and each one is unique. My friends joke about how I make a bedroom look like a living room but that’s just the dynamics of using the right lens and frame. That’s how I see the world, and especially movies. They have to have a quality of their own.

How has the depiction of violence changed in movies from the ’90s?

It has changed to some extent. When Salman (Khan) beats up somebody and 40 people fly behind him in ‘Dabangg’, we are going in for that experience and we enjoy that. In my films, I keep it more real but less gritty. I want to make the action real and believable. If a guy is hitting a guy, I stylise it in my own way. My use of sound and music is very different, which is what sets my films apart.

Is the action genre becoming redundant in Bollywood?

In 2020, theatres were shut. But, in the year 2019, which film ranked first in terms of box-office collections? It was ‘War’ and you cannot get more hardcore action than that. Salman Khan has action in every film, out of the six films Akshay Kumar does, at least two have action, and Tiger Shroff is a pure action figure.

So, to answer your question, action won’t go anywhere. Action will always remain a staple diet, it’s a universal language. When you switch on your satellite TV, you will find out that a lot of channels only run dubbed South Indian films, which are full of action. People love to watch that all the time, so it doesn’t matter. Action is not going anywhere for a long long time.

The younger generation has not done as much action as the previous generation. So Sanjay Dutt, Jackie Shroff, Anil Kapoor, John Abraham, became heroes compared to the newer guys, who have opted to do lighter films instead of hardcore action. But even they are slowly moving towards it. Ranbir Kapoor’s ‘Brahmastra’ is an out-and-out superhero film, Ranveer Singh’s ‘Goliyon Ki Raasleela…Ramleela’, ‘Padmaavat‘, ‘Bajirao Mastani’, ‘Simmba’ were all hardcore action films. It’s not like this generation is not doing it.

How was it working with John Abraham and Emraan Hashmi?

Honestly, it’s like a walk in the park. They are both wonderful guys; they are men, they are not boys. I have a very lovely equation with them; they understand me and I understand them. The fantastic thing about both these actors is that once they have committed to a film, they never question it. These two actors, once committed, blindly follow the director, hence the responsibility of the director also becomes much greater.

Looking back, are you happy with the way things have shaped up for you in the industry?

Of course. I don’t think there are many directors still working from the time that I started working. So, in that sense, I’ve been blessed. But again, it’s happening because I am constantly reinventing myself, and stay on the top of my game. And, at the same time, I am trying to take people, and viewers back to the time, to the films they enjoyed. A terrible word that has come in, which people think is very good, is ‘content’. People often say ‘content is king’. Are they trying to say that we don’t have any content in our films? We make films, we are not making content. Creating content is for OTT; we are creating films for a cinematic experience. It needs to be enjoyed that way. The biggest challenge is to create a good script that works at all levels. It should grip you.

One message for aspiring directors…

Consume. A director has to be like a sponge, he has to soak in everything from everywhere, so watch as much as you can, read as much as you can, travel as much as you can, expand your horizons and let that come into your filmmaking. You cannot look through a small telescope. And always be ready with scripts and ideas, be ready to develop, because you never know which one is going to work out. I’ve got three scripts lined up and all in three different genres. I’ve no clue which one will go on the floors first, but the fact is that I am ready and can roll them in time.