Sharing three stunning pictures of herself, Bollywood‘s ‘smile queen’ Jacqueline Fernandez on Friday thanked her fans as the number of her Instagram followers hit the 46 million mark. The ‘Kick’ actor took to the photo-sharing platform and shared a set of three of her nearly-topless pictures where she is seen holding a bunch of yellow and pink roses against herself.

The pictures are captured in a soothing white backdrop to add to the aesthetics of the picture. “Love you, thank you,” she wrote in the caption of one of the pictures. Fernandez who had earlier last week resumed work after a seven-month-long covid-induced hiatus, is seen sporting white coloured trousers in the pictures. Soon, DJ Snake commented on Jacqueline’s post. He dropped a crown emoji in the comment section. 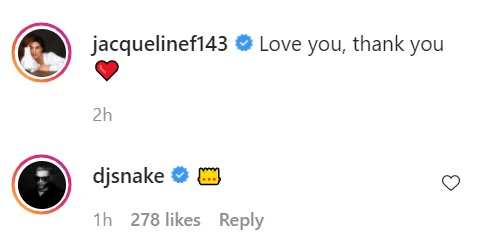 Meanwhile, on the work front, the actress will next feature in Sajid Nadiadwala’s ‘Kick 2’ with Salman Khan.