Kangana Ranaut is all praises for Samantha Akkineni; says ‘This girl has my heart’ | Hindi Movie News

Bollywood actor Kangana Ranaut is once again impressed by South beauty Samantha Akkikeni after watching the trailer of her upcoming web series co-starring Manoj Bajpayee which will be released on OTT.

After the first trailer of the series was released online on Wednesday, Kangana took to her Instagram story and shared a screenshot of the trailer featuring Samantha’s character with a subtitle that read, “I will kill them.”

Kangana further poured her heart out for Samantha and praised her “This girl has my heart @samantharuthprabhuofffl”. Soon after this, Samantha quickly reposted the same and responded saying, “thank you.” 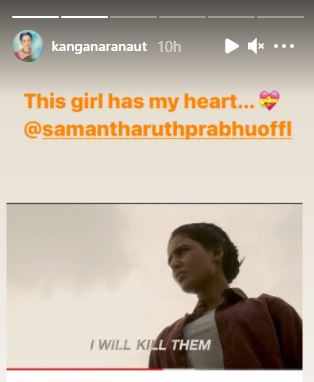 Earlier in April, Kangana was spotted praising Samantha and even called her an ‘epitome of woman empowerment.’

Samantha, on the other hand, was left might impressed by Kangana after seeing the trailer of her upcoming biopic based on the life of J. Jayalalithaa. Calling Kangana the ‘bravest actor of our generation’, she had said on Twitter, “#ThalaiviTrailer is outstanding @KanganaTeam You are the bravest, most daring and indisputably the most talented actress of our generation #Vijay sir goosebumps stuff just goosebumps stuff. Can’t wait to witness this magic in the theatre.”