Bollywood’s lovebirds Pulkit Samrat and Kriti Kharbanda are living together during this lockdown. Self-quarantined at home, the couple is making the most of their free time together.

Now Pulkit, whom his ladylove Kriti calls her “personal chef”, doesn’t want to make anything anymore and now wants the actress to bake.

Kriti took to her Instagram, where she shared a photograph of the baked breads made by Pulkit.

She captioned: “Uummmm… I have successfully consumed all the bread baked by my personal chef @pulkitsamrat, time for round 2!?”

Pulkit took to the comment section and wrote: “Time for round Tu (you)!A You gonna bake now.” 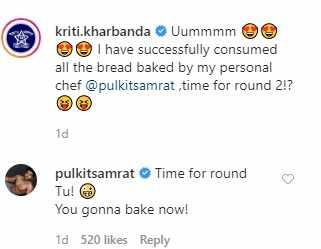 Kriti recently shared that pole dancing is her favourite form of workout. She even shared a glimpse of her performing on the pole in a black sports bra and shorts.

On the work front, Kriti and Pulkit were together seen in Anees Bazmee‘s comedy caper “Pagalpanti. The duo will be seen together again in Bejoy Nambiar‘s ‘Taish’. The film is slated to release next year.