Rajkummar Rao is quite active on social media and keeps his fans updated about his day-to-day activities through his posts. Now, on Monday, the actor took to his Instagram account to share a sunkissed picture of himself.

In the picture, he can be seen wearing a maroon t-shirt while sporting a messy hair look. In his caption, he sent out a positive message to his fans which read, “The light inside us is way brighter than the light outside. We just need to find it and work on it. Pic credit @patralekhaa”

Soon, filmmaker Hansal Mehta who has worked with Rajkummar in several films dropped a comment and said, “Love this look… Let’s shoot now”. 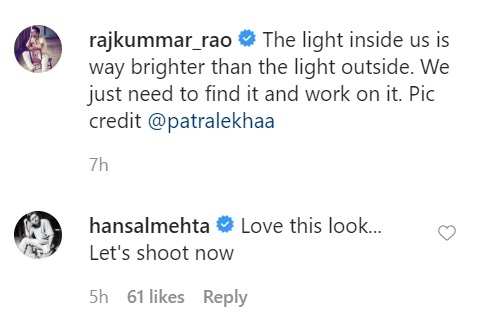 On the professional front, Rajkummar was last seen on screen in ‘Made In China’ co-starring Mouni Roy and Boman Irani. The National Award-winning actor has his kitty full with movies coming up, including Dinesh Vijan‘s ‘Roohi Afza’, Anurag Basu‘s multi-starrer drama ‘Ludo’ and Hansal Mehta’s ‘Chhalaang’ with Nushrat Bharucha.