Bollywood’s veteran and most loved actor Rishi Kapoor left for his heavenly abode on April 30, leaving the entire Bollywood fraternity and the nation shocked. Today, an intimate prayer meet was arranged for the late actor. Now, we got our hands on a picture of Alia Bhatt, Ranbir Kapoor and Ayan Mukerji after they immersed Rishi’s ashes and performed a puja for him.
Dressed in their whites, Ranbir, Alia and Ayan were snapped in the city at Banganga after they performed a small puja for Rishi Kapoor. Clad in face masks, the actors and the filmmaker were seen walking towards their vehicle after the puja.

Check out the picture here: 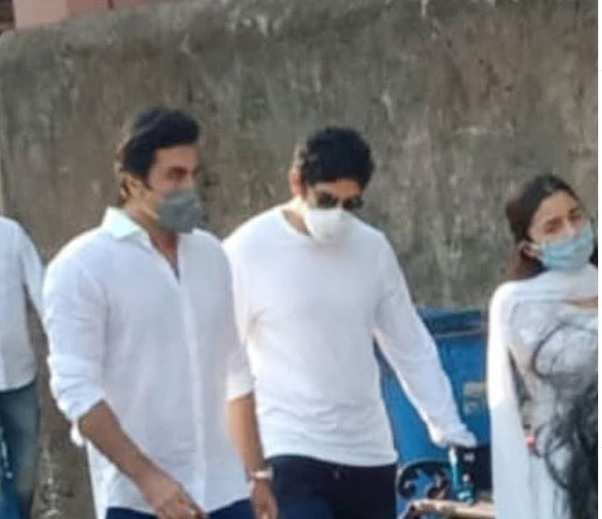 Talking about the puja held today at their residence, Rishi’s brother Randhir Kapoor said, “Rasam pagri puja was held yesterday. His ashes were immersed today in Banganga, Mumbai, followed by a quiet prayer service with family at his home because of the virus.”

Rishi Kapoor passed after battling Leukemia at a Mumbai hospital on April 30. The actor had recently returned back to India from New York after receiving treatment for cancer. He is survived by his wife Neetu Kapoor, son Ranbir and daughter Riddhima.