Rishi Kapoor’s sad demise has shocked not only the film fraternity but entire nation who is still mourning the loss of the ace actor. Ever since his demise, lot of throwback picture of the actor has been making the rounds on the internet. Now, Rishi Kapoor and Neetu’s wedding invite has gone viral on social media.
In the wedding reception invitation card it is written, ‘Mr and Mrs Raj Kapoor request the pleasure of your company on the auspicious occasion of the marriage reception of their son RISHI (Grandson of Late Mr and Mrs Prithviraj Kapoor with NEETU (Daughter of Mrs Rajee Singh) on Wednesday 23rd January 1980. Between 6-30 PM and 9-00 PM at R.K. Studios, Chembur, Bombay 400071.’

Check out the invite here: 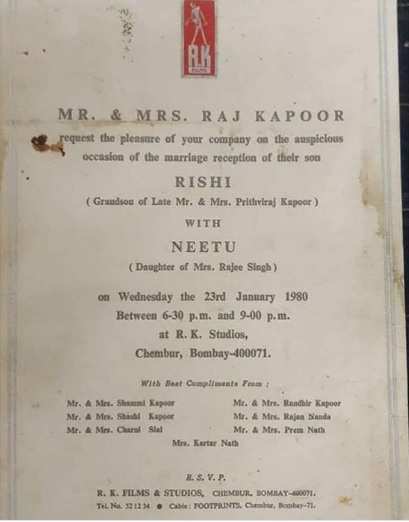 His Bollywood counterparts, co-actors, friends and family members have been sharing his pictures and memories along with their condolences to the family of the bereaved.

Rishi Kapoor was diagnosed with blood cancer two years ago after which he went to New York for his treatment. His pictures and videos from NY always used to make it to the social media. Neetu Kapoor, who was always by his side all the while, updated her Instagram handle with pictures and details about his health with her fans and followers. Many Bollywood celebs visited the veteran actor during his treatment.

The actor had returned back to India recently. He passed away at a Mumbai hospital on April 30. He is survived by his wife Neetu Kapoor, son Ranbir and daughter Riddhima Kapoor Sahni.