Sanjana Sanghi feels ‘grateful’ to wrap up the December schedule of ‘Om: The Battle Within’ with Aditya Roy Kapur | Hindi Movie News

Sanjana Sanghi who will be next seen with Aditya Roy Kapur in an action flick, has now wrapped up the first schedule of ‘Om: The Battle Within.’ The actress took to her Instagram handle to announce the same with a BTS picture with her costar Aditya and wrote, “As 2020 wraps, so does our most precious & invigorating December schedule. Grateful. #OmTheBattleWithin.”

In the picture, Sanjana was seen all smiles with Aditya Roy Kapur who couldn’t stop looking at her as both candidly posed for the camera in their all-new rugged looks for the film. 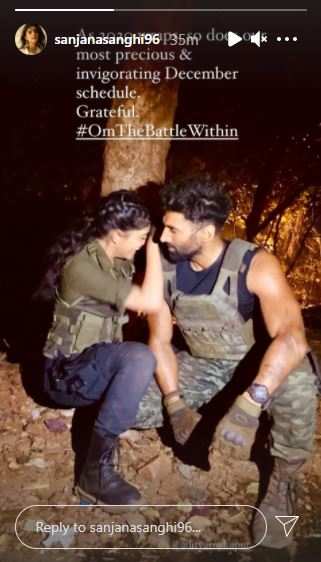 Talking about the film, it will be the directional debut of filmmaker Tinu Verma’s son, Kapil. While ‘Om’ promises to bring Aditya in an action-packed avatar, it is being backed by Ahmed Khan, Shaira Khan and Zee Studio.

The film will be shot in three cities across India while an international location has also been selected for the film. Currently, the makers are hoping to finish the entire film shooting by March 2021