Shibani Dandekar calls Ankita Lokhande ‘the princess of patriarchy’; says ‘She has played a major role in this witch-hunt’ | Hindi Movie News

Ankita Lokhande shared a long post on Wednesday evening where she slammed haters and also shared her stand on Sushant Singh Rajput‘s death probe. Responding to the post, Rhea Chakraborty‘s friend Shibani Dandekar has slammed Ankita by terming her the ‘princess of patriarchy’. She even alleged the ‘Baaghi 3’ actress of playing a major role in the ‘witch-hunt‘ as well.

Taking to Instagram story, Shibani wrote, “Such a grotesque letter by (Ankita). This princess of patriarchy who has never dealt with her own relationship issues with Sushant, clearly she wants her two seconds of fame and has capitalised on Rhea being targeted. She has played a major role in this ‘witch-hunt’ and she needs to be called out! She also just needs to shut the hell up. Enough Ankita! No one has more hate in their heart (?) than you.” 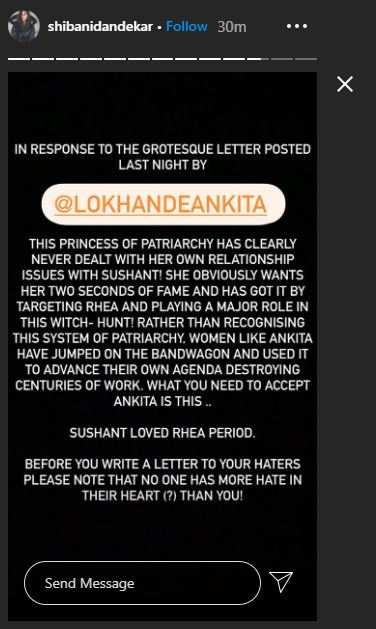 Furthermore, she even took to Twitter and alleged Ankita of capitalising on the current situation where Rhea is being targeted. “This woman clearly wants her 2 seconds of fame and has capitalised on Rhea being targeted because she has had never dealt with her own relationship issues with Sushant.. she has been the driving force behind this and she needs to be called out,” Shibani wrote.