Actress Shraddha Kapoor, who is quite active on social media, jetted off to the Maldives with her parents earlier today. She has shared a gorgeous view from her hotel and updated the fans about her dreamy vacay.

Shraddha took to her Instagram story and also mentioned that she is missing her brother Siddhanth Kapoor on their family vacation. The post read, “And we are here! Fam time with mommy and baapu @shaktikapoor Miss you so much bro! @siddhanthkapoor” followed by smiley, sunflower and purple heart emojis. Have a look: 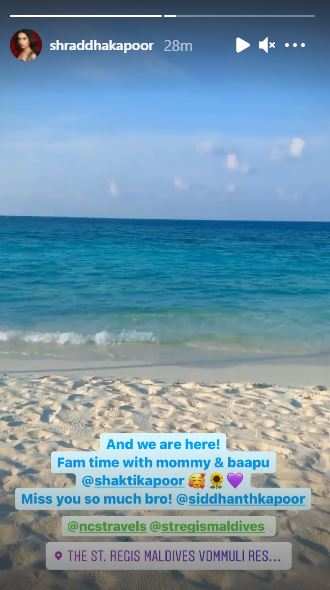 Meanwhile, Shraddha was recently in the Maldives for her cousin Priyaank Sharma’s wedding with Shaza Morani. The internet was filled with Shraddha’s stunning pictures and videos. She was also seen performing at the wedding. Apart from her parents, she was accompanied by her rumoured boyfriend Rohan Shrestha. The duo is often spotted together enjoying dinner dates in the city. But Rohan’s presence at the wedding sparked the relationship rumours.

ETimes got in touch with Rohan’s father earlier and spoke to him about their alleged relationship. Spilling the beans on their wedding, his father had said, “If they decide to marry each other, I will happily do everything for them. The word ‘objection’ does not exist in my dictionary. And let me tell you, I call Rohan as ‘My Dream’, I rarely address him as ‘Rohan’.”

On the work front, Shraddha will be next seen in Luv Ranjan’s next with Ranbir Kapoor. The film is slated to hit the theatres in 2022.