Sushant Singh Rajput passed away on June 14 at his Bandra residence. According to the reports, the actor was suffering from clinical depression and he was being treated for the same. Earlier, Mumbai Police and Bihar Police were looking into his death case. Now, the case will be probed by the CBI.

Meanwhile, his sister Shweta Singh Kirti has been sharing a lot of updates on social media. She recently even shared the screenshot of her and Sushant’s Whatsapp chat on her Instagram handle.

Today, she took to her Instagram and shared a picture of lord Shiva with a message. The message reads, “Someone said be careful who you mess with because you don’t know who protects them in the spiritual world.” She shared the picture and captioned it as, “Har Har Mahadev🙏 #justiceforsushantsinghrajput #godiswithus #Warriors4SSR #JusticeForSushantSinghRajput #jaijaishivshambhu 🔱🔱🕉⛳🖤🖤” Check out her post here: 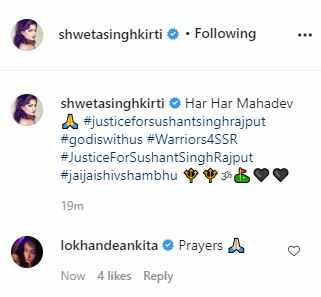 Shweta’s post came soon after Rhea Chakraborty spotted at the ED office. A few minutes back, Rhea was spotted since she was summoned by ED to record her statement. Earlier, Rhea had requested that the recording of her statement be postponed till SC hearing. Reports suggested that the ED rejected her request. Clarifying on the same, Rhea’s lawyer advocate Satish Manshinde said in a statement, “Rhea Chakraborty is a law abiding citizen. In view of the fact that ED has informed the media that the request to postpone the attendance is rejected … she has appeared in the ED at the appointed time and date.”